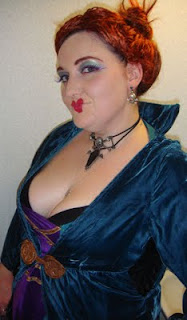 Yes, Halloween has been and gone, with only the left over decorations and a costume in the corner remaining.

This year I got to dress up twice again. For the crew party I was going to go as Jem from Jem and the Holograms, that great 80’s cartoon. I have the whole costume made…. Then I got with my friends on the ship and we decided to go as the witches from Hocus Pocus! I made my costume on the fly out of vintage dresses and I think it came out pretty well! We had a great time taking photos with everyone and posing, as all good performers do! For the passenger party we went sexy, but covered! I bought a black and purple pirate wench outfit from Ricky’s in New York and made bloomers to go under it to cover me up more. It worked out pretty well, and I love having extra costumes around!

What do you think of my Halloween creation? Leave me comment to let me know!

Where to find me!