My Boots Are Made For Walking! 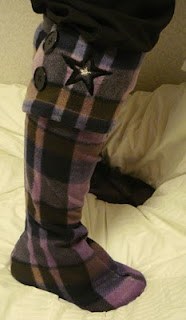 Alongside showing you my crafts, I promised I’d write about ship life. My current news is a good example of that. The economy has finally hit my profession. I think I mentioned that I work for a production company, not directly for the cruise line I work on. The cruise line dictates what shows they want us to do… and now they dictate how our cast is made up. My production company is expensive (relatively) so the cruise line has decided to phase out my company in favour of cheaper in-house production. They are also bringing on a new show. This means one of our shows has to go, and also 5 members of my cast have to go too. We have a month left together, then we are cut down from 18 people to 11. It’s going to be interesting rearranging these shows around such a small cast… I’ll keep you posted on how it goes!

On a brighter note, yet another craft to show you!! I found this tutorial on UrbanThreads.com about how to make a pair of boots out of a knit sweater and ballet flats…. I wanna do that!! Instead of a knit sweater I used an old robe made out of fleece, so I had to adapt the process a little.. but here are my knee-high purple plaid boots! I love them and hope you do too!!!

Finally, I was super happy on Sunday to see that my favourite Costume Designer Sandy Powell won an Oscar for The Young Victoria – she’s one of my costume heroes!! Yay for Sandy!!! 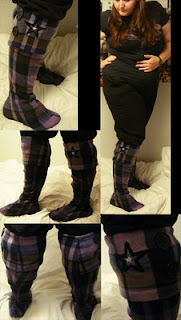 Where to find me!